Oliveira Silva became executive director in November 2011 and was known as an advocate for smallholder farmers around the world.

In reporting his death, the ICO released the following statement:

“The International Coffee Organization announces, with great sadness, the passing of the executive director, Robério Oliveira Silva, on 30 December 2016 in Belo Horizonte, Brazil. Mr. Silva’s dedication to the coffee community was exceptional and he will be deeply missed. Our thoughts and condolences are with his family at this sad time.”

Oliveira Silva earned a degree in economics from the Federal University of Minas Gerais in Brazil and subsequently served in both the public and private sectors. In addition to his five years at the helm of the ICO, he was director of the coffee department in the Brazilian Ministry of Agriculture, Livestock and Food Supply; commodities secretary in the Brazilian Ministry of Development, Industry and Foreign Trade; executive secretary of the Brazilian Chamber of Foreign Trade (CAMEX); secretary‑general of the Association of Coffee Producing Countries; and secretary‑general of the Brazilian Federation of Coffee Exporters. 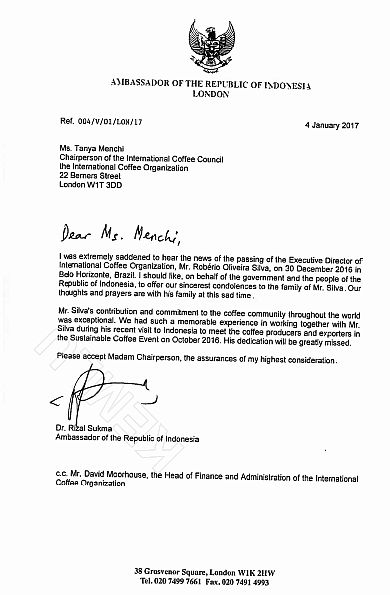 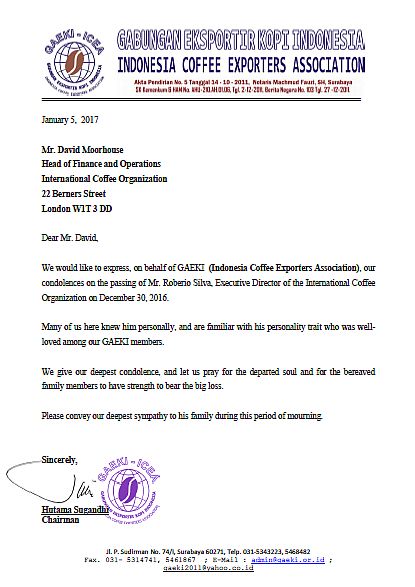 This entry was posted on 09/01/2017 and is filed under Berita. Written by: admin. You can follow any responses to this entry through the RSS 2.0 feed. You can leave a response, or trackback from your own site.